skip to main | skip to sidebar

At the corner of North Central and Kingsbury in Clayton’s Old Town neighborhood is an L-shaped park named for a private boys’ school that once stood there at 222 North Central Avenue from 1930 to 1971. Taylor Park is now a popular place for Old Town residents to relax and play.

Taylor School was founded by Edgar Curtis “Joe” Taylor of Derry, New Hampshire. He served as headmaster throughout the life of the institution that bore his name. The honored Taylor School was an institution that formed the minds of boys for over 40 years. After coming to St. Louis to teach at Washington University, Dr. Taylor saw a need for a small private school to prepare boys in grades 6 through 12 for Eastern colleges and universities. He purchased a 14-room home on what was once the large Bemiston tract owned by Judson Bemis prior to Clayton’s incorporation. Dr. Taylor hoped it would be a comfortable and nurturing environment to foster the learning and development of young men. The school’s small class size, curriculum, and sports made it similar to Eastern preparatory schools. In 1938 the school was expanded to include new class-rooms and a library, and the adjoining property at 228 North Central was purchased to house faculty.

The school operated until 1971 when the Reverend Doctor E.C. Taylor, ordained an Episcopal minister in 1949, retired. The City of Clayton purchased the land in 1974 for $150,000. The four school buildings were removed, and the area was landscaped and dedicated a park in 1977 by Mayor James Laflin. All that remains of the school is the monument at the northwest corner of the park. The monument was a gift of the Class of 1945 to honor Taylor students who had served in WWII, which had a tremendous impact on the school’s enrollment and philosophy. For many years, the monument was thought to be just that, until recent research revealed it served as the base of the school’s flagpole. The City of Clayton restored the flagpole to the monument in 2007.

Another structure in Taylor Park, and perhaps its most distinguishing feature, is the inviting bright yellow gazebo on the southwest corner of the property. The gazebo and its surrounding garden were refurbished to honor Katharine (Kitty) Hoblitzelle, a passionate environmentalist and devoted community volunteer who served on the City’s Landscape Advisory Committee. Known as Kitty by friends and Mrs. Hob by neighborhood children, Mrs. Hoblitzelle, originally of Philadelphia, attended Miss Porter’s School in Farmington, Connecticut and studied at the Philadelphia Museum of Art. A certified Master Gardener and Master Composter who received many awards, she dedicated herself to botanic groups including the Committee for Environmental Education, the Center for Plant Conservation, and Open Space Council. She founded and presided over Gateway to Gardening and was a member of EarthWays, a division of the Missouri Botanical Garden. The gazebo, now marked with a garden stone, was dedicated on October 28, 2006.

Taylor Park offers a wide expanse of manicured lawn that runs nearly a block in length on the Kingsbury side, where picnics and games are a common occurrence. Play structures on the North Central side include a climbing set, swings, slide, and more. The park hosts visitors of all ages who find something to enjoy, whether it be history, horticulture, or just having fun. 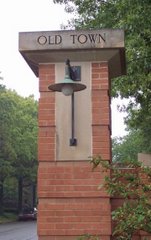